Hotel 63 was built between 1865 and 1870 and for most of its first seven decades of existence, it was a private address. It was first known as 2 Marlborough Gate and amongst its residents, it housed the Royal Consul for Italy, his wife and son. It was renamed 63 Bayswater Road in 1938 as part of London County Council’s standardisation and clarification of street names in London.

In the late 1880s the lovely Italianate leaded bay window in the front bar was designed and installed by William Arthur Smith Benson, a major designer from the Arts and Crafts Movement. He was also responsible for the installation of the wall lights in the entrance hallway. It has been said that he dedicated the window to his wife, Venetia, the youngest daughter of Alfred Hunt, the famous water colour artist, whom he married in 1886. It is the only surviving Benson window of its type, the other example having been lost in wartime bomb damage. 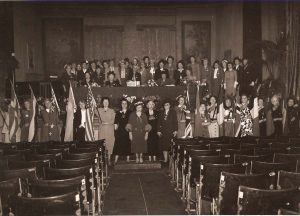 5 January 1946 was a decisive date in the history of the Federation of Soroptimist International of Great Britain and Ireland. At a Board meeting that day, the Governors  decided to recommend to the next Annual Conference that a headquarters be established, if possible by 1948. At the Conference in November 1946 under the Presidency of Miss FM Bailey MBE, FCIS, the membership endorsed the recommendation and from there the idea of a residential club took shape.

A Premises Committee was established and tasked with finding a suitable property to include office accommodation (the Federation was to be a tenant), a place for members to meet each together, cloakroom accommodation, catering facilities and hotel accommodation for visiting Soroptimists.

The Club was financed by forming a Society, under the Industrial Provident Societies Act, to which Soroptimists could contribute by subscribing for shares so that it would be owned by members and controlled by a Committee of Management.

It is said that members of the Premises Committee walked miles, up and down streets, in and out of buildings and up and downstairs, in search of the right property. On 26 June 1948 the Premises Committee inspected 63 Bayswater Road, London, W2 – which had been offered to Mrs. Sykes BA, a Soroptimist and a property owner. It was that rare object, an unrestricted freehold property. At the time of inspection, it was being run as a high-class flat letting house, and soon was to become the Soroptimist ‘home’ in Central London.

If you can’t see the booking form below, click here to open in a new window.
N.B. This works best in Chrome, or Firefox. Also, please note, when it asks if you are a returning customer, it is related to this booking system, not whether you have stayed with us before. Thank You.